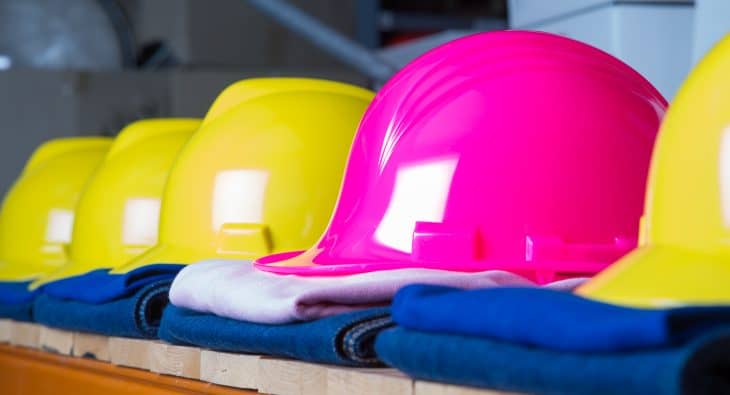 Women are Moving the Needle in Construction

Since women entered the US workforce in the 1960’s, they have faced adversity and overcome it – now their roles are changing and strengthening. In 2019, NASA even marked its first all-female spacewalk. Women are having their moment and it’s about time.

Although women make up nearly half the US work force they only represent around 10% in  construction. As the industry continues to grow, employers are looking to capitalize on this largely untapped potential group as a slow, but steady influx of female Project Managers, Engineers, Architects and Tradeswomen enter the workforce.  At Bay to Bay we’re proud that women represent 20% of all our associates – double the national average. Here’s a small sample of some of our Super Star female associates who move the needle at Bay to Bay.

Bay to Bay Women in Construction

Katie Maquet, Estimating Coordinator, has deep roots in construction. She first learned through the eyes of a child (her grandfather and father were Ironworkers in NJ/NY) After college, she entered the industry working for a large mechanical subcontractor and has since experienced each level of construction. Over her almost 20-year tenure she has seen momentum for women in the industry. Reflecting, “In the last 15 years we’ve seen a lot of progress.” She noted there is historically less of a pay gap between genders in construction than other industries, but she admits, there is still progress to be made. As for advice for women coming into the industry? She says, “don’t think about the potential for inequality, prove yourself and you’ll be respected.”

Leigh Anne Callis, Lead Project Accountant, in contrast has less experience in construction but has enjoyed learning the industry during the last four years at Bay to Bay. “It’s exciting to be a part of something tangible, something you can see grow and has a real impact in the community,” she says. Leigh Anne appreciates learning from women leaders and role models in the field including Bay to Bay COO, Kate Rogers. “Kate is a powerhouse. And I’m proud to work for a company who would place a woman in such an important role.”

Katelyn Widing is a Foreman (or Forewomen if you prefer), who helps oversee daily jobsite activities, moving around from project to project. Much like Katie, she grew up watching her father in the field and was naturally drawn to construction. In her 10 tenure, Katlyn has never been afraid to roll up her sleeves and get her hands dirty. In a previous role she remembers her team building expansive car washes from the ground-up. She chuckles, “No one really had a title, because everyone was hands-on to get the work done.” When asked about women’s role in the field, she’s honest in witnessing good and bad, “I have felt others look at me like I won’t be able to do the work. And then I just prove them wrong.” Her advice for women considering the field, “Just keep going. Make sure you’re emotionally strong and don’t let the little things bother you. Get in there and get it done.”

It’s clear women have an expanding role in construction. In an industry that continues to be male dominated, women will strive to push the boundaries and break the mold, driving forward making progress for the next generation.

About Bay to Bay Properties

Bay to Bay Properties offers complete services for all commercial construction projects. Our professional and dedicated team are committed to delivering the quality and experience you expect from a General Contractor.

Our project management team will ensure complete coordination of workers, materials and supplies to complete your project on time and on budget.

Bay to Bay Properties has extensive experience with large commercial construction projects in following industries: Retail shopping centers, Retail single tenant, Office, Industrial, and Medical. Whether the project requires ground-up new construction or custom build-out, we will provide professional and creative work. We specialize in providing superior quality workmanship in condensed timelines. We also pride ourselves in our ability to meet your specific construction needs for your commercial property including creative design, replica design, and specialty jobs.